The Book Is Here! 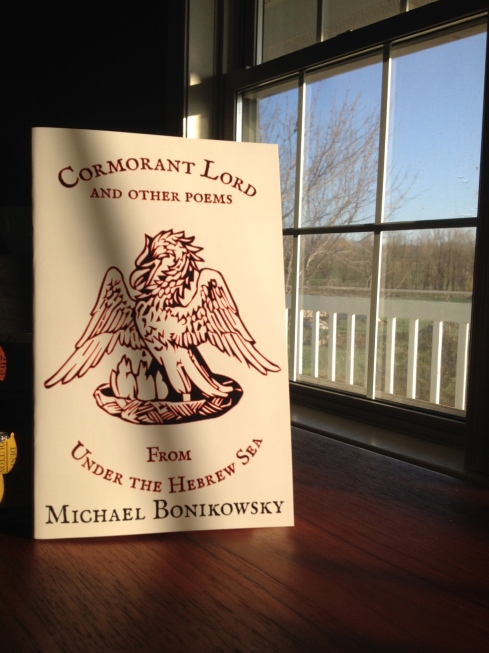 “Cormorant Lord and Other Poems” is now available! Fifteen poems about babies and burnout and debt and disability and getting broken and getting built and the Jesus in all these things (and some other things too). Made of trees and smelling of ink and available to buy right here. Also available as an e-book.

Every morning, every night

He folds his hands and holds them up

I spill out the blister packs

I have seen that shape before

And now I find it troubles me.

Those hands held in just that way.

But I can’t place the memory.

Capsules gather in his hands

Each decoction in its turn

That neither of us care to learn.

They’re meant to still his demons

Quiet the trembling in his limbs

Meant to make his visions cease

And meant to win some rest for him.

Only later on that night

When all is quiet on the floor

I remember where I’ve seen

Those hands make that shape before.

On Sunday at the altar

Patrick kneels with his hands held up

To eat, drink in that same way

Body and blood from that same cup,

Would that we all were so devout

For to cast a mystery out.

Poems In A Book

Insomnia-inducingly, bowel-looseningly excited to announce that Cormorant Lord and Other Poems From Under The Hebrew Sea is now available here. All the best poems from this site (and even some that aren’t) now available to carry about with you in case you see a carefree person and wish to unsettle them.

Designed by the inimitable Jeff Baker of digisciple.me and presented in finest .pdf and tree-paper.